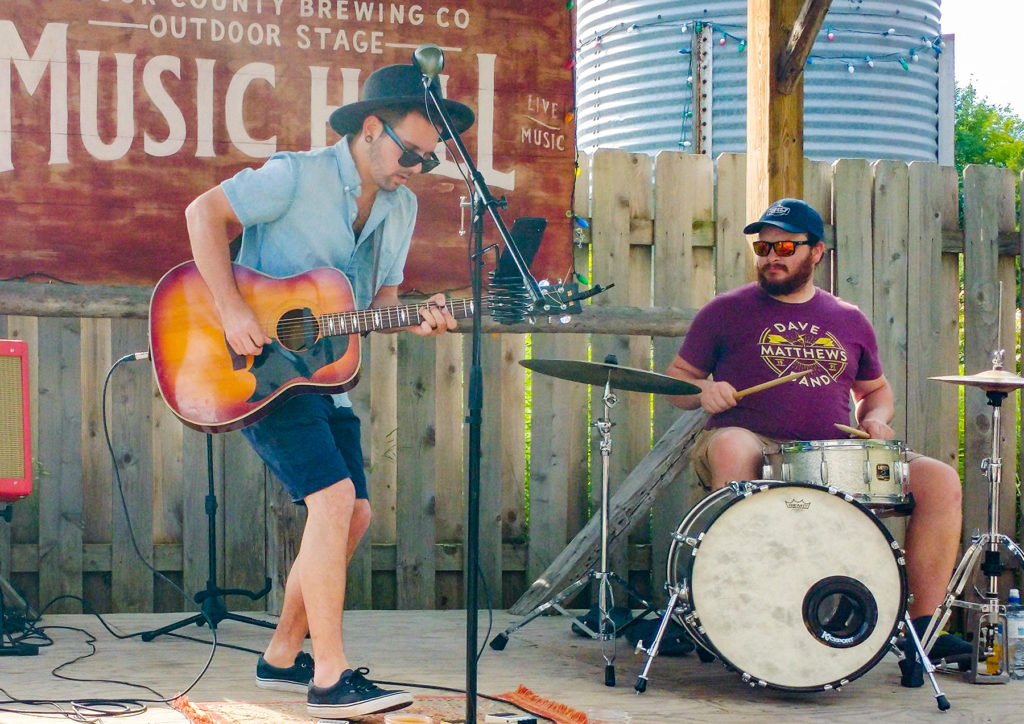 Traveling in song with Hunter Gatherer

Every picnic table at Door County Brewing Co. Taproom & Music Hall was full two Saturdays ago. Although the beer garden scene was barely visible from the road, the sound of the energetic yet laid back music of Hunter Gatherer was more than enough to gather a crowd.

You might doubt the feasibility of tailoring an outfit to the variety of music presented by Hunter Gatherer – “House of the Rising Sun”, Bill Withers, “Bad, Bad Leroy Brown” and Bob Dylan, to name a few. -a – but with sunglasses, a wide-brimmed hat, and prominent circular earrings, he achieved it.

Hunter Gatherer is Hunter Hildebrandt’s stage name, and he has taken to the stage using a different approach to live performances this summer, playing afternoon concerts and varying his musical selection considerably.

“I like the emphasis on the original [songs], going out of bars and now more in cafes or beer gardens, ”said Hildebrandt.

The beer garden crowd was certainly receptive to his approach. Hunter Gatherer originals such as his recent release “Frootenanny”, from his Americanara album, received attentive listening and admiring applause.

“I could spend the whole afternoon here, until the moon came,” he sang.

This line to Hunter Gatherer’s “Joie de Vivre” – a track that lent itself particularly well to live performances – described the atmosphere at Door County Brewing Co. that afternoon, and it is certainly a feeling that many people feel it all over Door County, particularly during the summer.

References to the moon continued in another original, “Laughberry Creek,” one of the many songs Hildebrandt’s travels inspired him to write.

“This is what we call a palate cleanser,” he said presenting the original “Ostrich” after playing another round of folk, alternative and rock songs.

After successfully “smashing” one of Hildebrandt’s recent shows, drummer David Lamb – from their previous band, Nature: The Band – officially accompanied Hunter Gatherer during his performance at Door County Brewing Co.

“I like to play in a place where I want to spend time at home or send people,” Hildebrandt said.

Hunter Gatherer was scheduled to play at Door County Brewing Co. until 4:30 p.m., but listeners held him there after 5 p.m. Lamb’s drums held a conversation with Hildebrandt’s guitar playing, even during the 30 minutes of improvised bonus music. It was as if more than two instruments filled the space: Hildebrandt made seamless transitions between sound effects by discreetly pressing down on the range of guitar pedals at his feet.

Hildebrandt’s stage name started off as a joke. He studied anthropology at UW-Oshkosh and expected the Hunter Gatherer nickname to end in about a week. But, people began to recognize him by that name, and he stayed.

In addition to travel inspiration, Hildebrandt’s anthropological background is evident in his songwriting as it incorporates themes from nature that illustrate a complex human connection with the simplest of interactions. These juxtapose well with a sense of coming home from travel and stay to soak up the everyday moments.