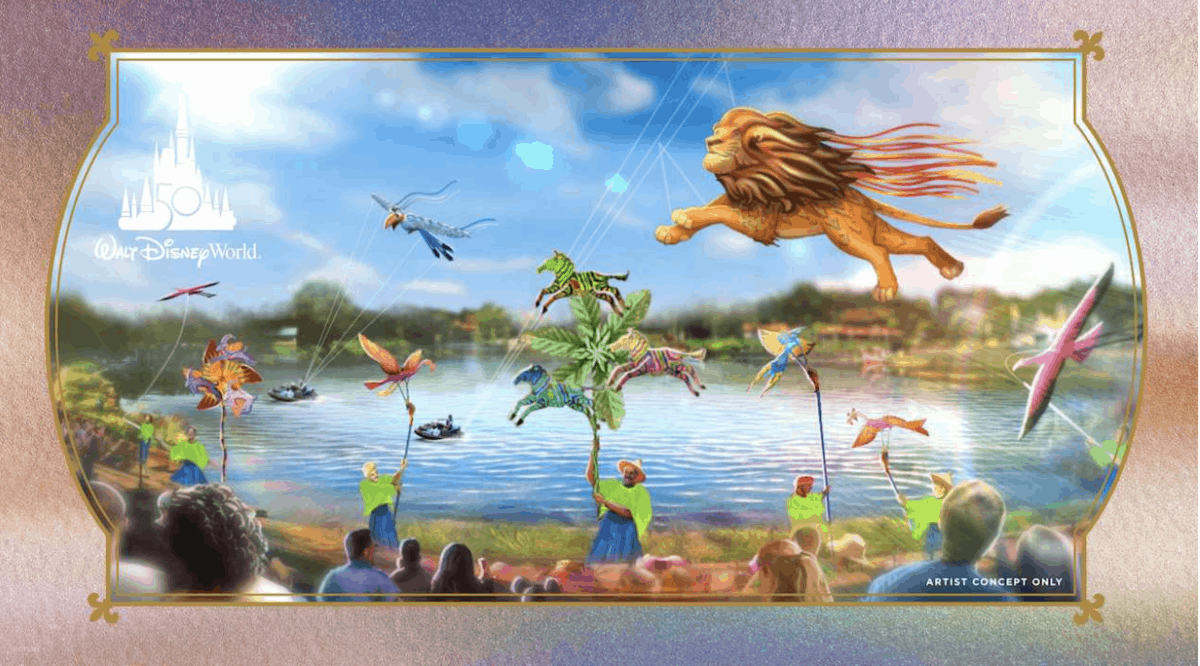 In case you missed it, Disney has announced that a new daytime show – Disney KiteTails – is coming to Disney’s Animal Kingdom for the 50th anniversary. This news comes months after the announcement of the end of the night Rivers of Light show.

We’ve already seen construction move quickly on the next show, but now as we continue to get closer to the official Disney KiteTails debut, we know that this daytime experience will have several hours of showmanship throughout the day!

Guests can also now add Disney KiteTails to their plans on My Disney Experience, ensuring you won’t miss out on this spectacular experience once it debuts on October 1.

Related: Happily Ever After Officially Gets New Showtime Before Retirement

There are also new daytime entertainment at Disney’s Animal Kingdom theme park. Check out this artist rendering of “Disney KiteTails”, which will come to life multiple times a day at the Discovery River Amphitheater starting October 1st. – some spanning 30 feet in length – will represent Disney animal friends, including Simba, Zazu, Baloo, and King Louie. These colorful creations will dance across the sky to favorite Disney songs in an exhilarating and vibrant experience for the whole family.

Hearts and imagination will soar as incredible kites and windcatchers dance through the air to beloved Disney songs during this high-flying performance at Disney’s Animal Kingdom theme park. Marvel at the elaborate three-dimensional kites of Simba, Zazu, King Louie, Baloo and many more as they soar over the Discovery River Amphitheater, starting October 1, 2021 during celebrating the 50th anniversary of Walt Disney World Resort.

Are you excited to see Disney’s Animal Kingdom get a new show? Let us know in the comments below.

If you want to visit Disney World during the 50th anniversary celebrations to see all that the parks have to offer, but aren’t sure where to start, don’t hesitate to contact our friends at Academy Travel.

What hunters should know about Utah’s waterfowl hunts in 2021

Programs, guidelines for students and teachers ready before school reopens in Kerala