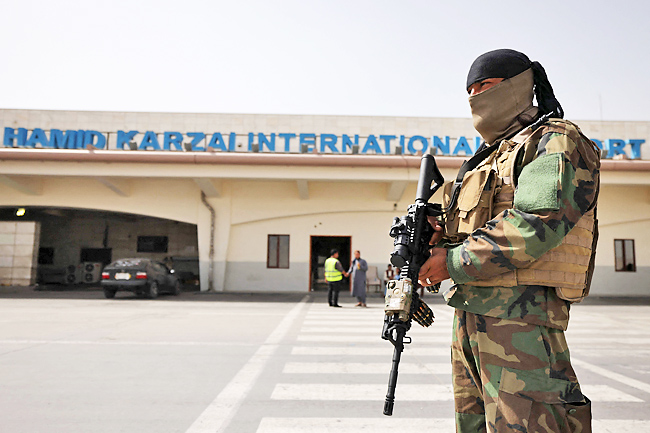 SINGAPORE (CNA) – Many security agencies fear the Taliban takeover of Afghanistan could lead to more terrorism in the region, Justice and Home Affairs Minister K Shanmugam said on Friday.

This is because Afghanistan under the previous Taliban regime provided a safe haven for potential terrorists from Southeast Asia, including Singapore, he said.

He added: “Will this happen again? A lot of people fear this. I fear it will happen again.

“So yes, I think the prospect of an increase in terrorism in the region, I think a lot of security agencies and serious people are worried.”

Foreign countries on Wednesday greeted the composition of the new government in Afghanistan with caution and dismay after the Taliban appointed veteran extremists to senior positions.

The new acting cabinet includes former detainees from the US military prison at Guantanamo Bay, while Home Secretary Sirajuddin Haqqani is wanted by the United States (United States) for terrorism and receives an award of $ 10 million.

Regarding the security situation in Singapore, Shanmugam said: “On a daily basis, I would not say that the events in Afghanistan have resulted in an immediate increase in the security threat – but it is a strategic issue; it is a medium to long term problem and we will have to prepare for it.

“But meanwhile, the Department of Homeland Security is examining the landscape, what’s going on elsewhere, both in the region and beyond, including Afghanistan. And of course, we’re matching that up with what we need to do in Singapore, and that’s an ongoing thing. “

Shanmugam also referred to the September 3 terrorist attack in Auckland, when an Islamic State-inspired extremist known to authorities stabbed and injured at least six people in a supermarket in a shopping mall before being shot and killed by the police. police.

New Zealand police said they did “absolutely everything possible” to monitor the extremist ahead of the attack. Shanmugam said the man, who bought knives and researched bomb-making online, had been under police surveillance since 2016 and was arrested twice between 2017 and 2018 for other offenses. He was released two months ago.

“There were very clear signs that he wanted to carry out a terrorist attack, but under current New Zealand anti-terrorism laws he could not be arrested or charged for checking out how to make bombs and buy knives.” Shanmugam said.

“I mean, a lot of people buy knives, so you have to be able to tie it to an intention.

“But even if they could tie it to her, that wasn’t enough to get him back, to indict him in court.”

The minister said New Zealand was now considering amendments to strengthen its anti-terrorism laws, adding that events there had made him “think of the contrast” with Singapore.

“In Singapore, this man was reportedly detained under the Internal Security Act (ISA).

“He would not have been released two months ago, and we would have tried to rehabilitate him early, and he may be living now,” he said.

“Each country must find its own way to meet this challenge. For us the key is to make sure that social and economic policies help keep good opportunities for all and make people feel they have a stake in the country. This helps to keep extremism and radicalism at a very limited number.