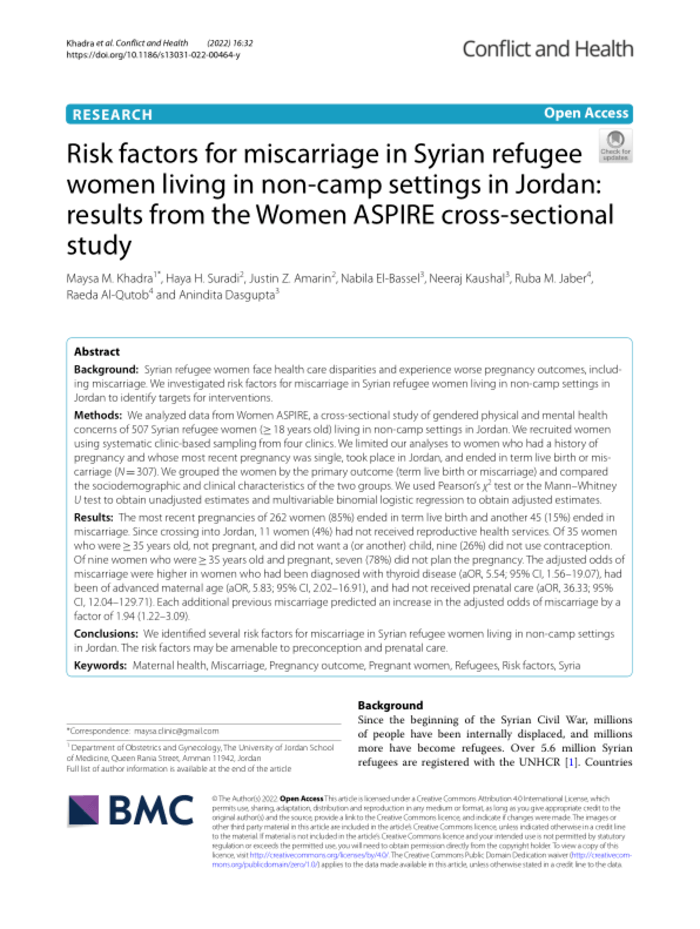 Risk factors for miscarriage among Syrian refugee women living outside of camps in Jordan: results from the Women ASPIRE cross-sectional study – Jordan

Methods : We analyzed data from Women ASPIRE, a cross-sectional study of gender-related physical and mental health issues of 507 Syrian refugee women (≥18 years old) living in non-camp settings in Jordan. We recruited women using systematic clinical sampling at four clinics. We limited our analyzes to women who had a history of pregnancy and whose most recent pregnancy was single, occurred in Jordan, and ended in term live birth or miscarriage (N = 307). We grouped the women according to the primary endpoint (term live birth or miscarriage) and compared the sociodemographic and clinical characteristics of the two groups. We used Pearson’s χ test or Mann–Whitney U test to obtain unadjusted estimates and multivariate binomial logistic regression to obtain adjusted estimates.

Results: The most recent pregnancies of 262 women (85%) ended in a live birth at term and 45 others (15%) in a miscarriage. Since their stay in Jordan, 11 women (4%) had not received reproductive health services. Of 35 women aged ≥ 35 years, not pregnant and not wishing to have a child (or otherwise), nine (26%) were not using contraception.

Conclusion : We identified several risk factors for miscarriage among Syrian refugee women living outside camps in Jordan. Risk factors may lend themselves to preconception and prenatal care