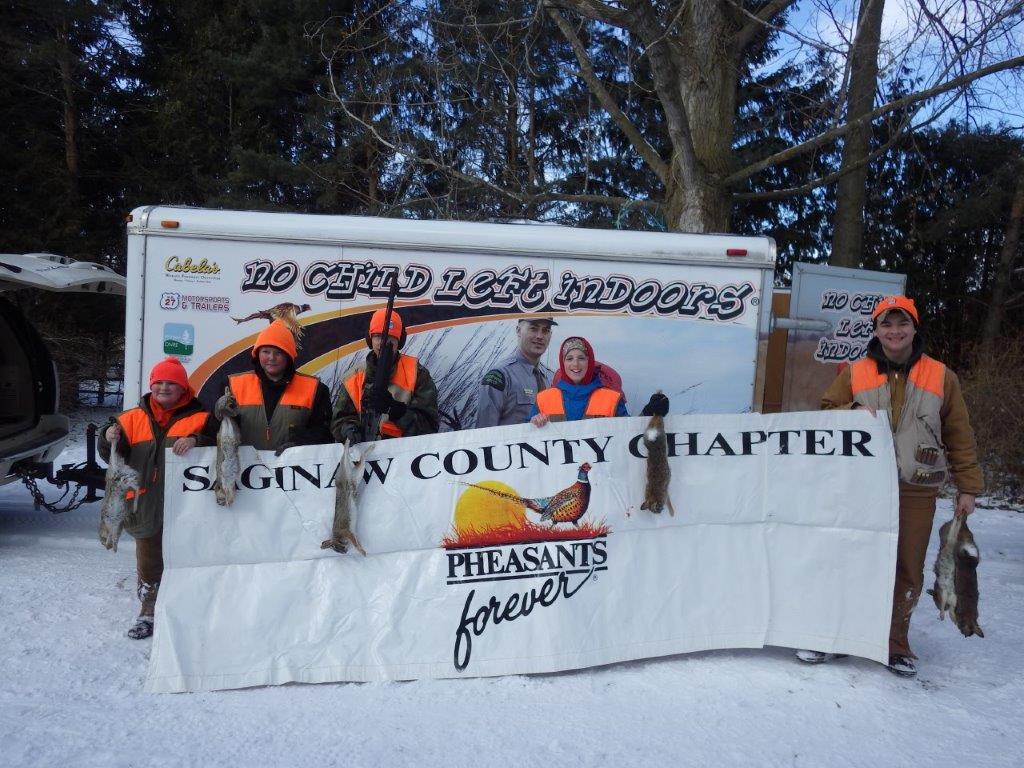 Moment of youthful pleasure spent in the ‘rabbitat’

When it comes to weather, March can be quite a capricious month. One day you’ll think spring is coming early, but the next day winter is back, and with a vengeance. That’s what I had in mind when we set the date of March 12 for a rabbit hunt on my farm, involving young hunters.

Just like March, cottontails can also be very temperamental, depending on the weather. One day they are out and about and suddenly they have literally fallen to the ground and can stay there throughout a winter storm, even for a day or two.

Having a set date, especially in March, can be a boom or bust, but then that’s the hunt for you. You go with what you have, and due to various schedules (including my stay in Florida in February), March 12 was literally set in stone.

Bill Fischer, of Frankenmuth, is the Outreach Coordinator for Pheasants Forever (PF) in Michigan, and as an example, is responsible for developing hunting and shooting activities and programs for youth and women, a necessary factor for the future.

Having hunted pheasant on my farm, Fischer knew that I had portions of land devoted to what I call ‘rabbitat’, and he had observed many stray rabbits and wondered if I would be willing to organize a rabbit hunt. For the young.

Well, folks, it was a no-brainer for me because I fully support introducing young people to various outdoor hobbies, and hosting a “youth only” bunny hunt was definitely my cup of tea.

In Michigan these days, small game hunting takes a back seat to deer hunting, and so introducing children to deer hunting has become the top priority, which I believe is is a sad situation.

Small game hunting offers a totally different atmosphere, which can include a lot more action than sitting very still and quiet for long periods of time in a shade. In fact, using beagles for an “old fashioned” rabbit hunt can be very intense and downright exciting! That was my hope for the youth-only rabbit hunt on my farm.

A key person I contacted for the hunt was Paul Broecker of Silverwood who is a well rated local gun dog with a pack of beagles. At 85, he’s pretty snappy, and I can personally attest that it’s quite a challenge to keep up with him in dense, shin-tangled cover.

The only thing Broecker carries in the field is his reliable cedar walking stick, which he needs to maintain balance and allow defined stability while drilling through brush (a handy walking stick in this environment works too for me). He hasn’t carried a gun while hunting with his beagles in years, and he’s only there to listen to the “music” of his happy dogs singing along to a hot track. He goes out with his beagles at every opportunity, and he hopes that when he dies it will be with his boots on while “listening to music”.

Before the Young Bunny Hunt, I invited Broecker to my farm so he could go over everything and know what to expect, and discuss our battle plan, so to speak. He showed up with a pair of his older beagles and we walked around my rabbitat, and the only things we both carried were our reliable walking sticks. It was just about listening to the music, while having an idea of ​​how and where to start things on the day of the hunt.

Broecker was very impressed with my ‘rabbitat’, which was interwoven with bunny tracks and even lots of carved (heavy traffic) bunny trails in the snow. His pair of beagles immediately started singing a beautiful duet and continued to sing, with rabbits frequently running near us, soon followed by noisy beagles.

Yes, folks, there’s plenty to listen to beagle music on a nice winter’s day! We actually had to round up the beagles, who kept finding rabbits to hunt and had no intention of stopping. Broecker and I also knew how to go about hunting, no matter the weather. Hopefully that would be ideal.

I was informed that five young hunters would be coming, and on the morning of the hunt I had placed orange flags at five key positions for the shooters to stand in and maintain that position for the entire hunt. The positions were selected because they channeled “pinch points” in the rabbitat and provided a safe firing zone.

My rules were simple: only children were the “shooters”, and they had to be accompanied by an adult (in this case, it was their father). Only shotguns can be used because .22 rifles are not easy to hit on moving targets and .22 bullets are known to ricochet when hitting a hard surface. It could prove dangerous for others, as well as dogs, and some low spots had ice under the snow.

I had been informed that all the children had hunter safety and were part of an archery and skeet league sponsored by the Frankenmuth Sportsman’s Club. Although they all knew how to handle firearms safely, none had ever hunted rabbits before. Ammunition and all necessary shooting accessories (such as hearing and eye protection) were provided by the Saginaw County chapter of Pheasants Forever.

The weather that day was sunny, had two inches of fresh snow, and the temperature was in the 1930s, which was ideal weather for rabbit hunting, except for one thing: the wind, which was below zero at over 40 mph. from the northwest. However, all five stations were covered in a thick blanket and offered definite protection from the literally brutal wind. Everyone was also properly dressed for the weather, and also with plenty of “orange hunter”.

Paul Broecker could have brought his entire pack of beagles, but instead he only brought the two older, seasoned dogs to keep things tidy. The first station was located at the outer corner of a “bend” in the cover, and seconds after Broecker released his pair of beagles at the end of the rabbitat there was a sudden shotgun blast, and the first rabbit of the day had fallen for the count.

Then station number two came on, followed by stations three and four. Due to the nature of bunnies circling with howling beagles, station five at the end of the line took a while to light up, but eventually got into fast, continuous play!

I had ordered the kids before the hunt to stay alert and ready after the chase scene passed by them, because things would most likely come back. There would also be other bunnies uninvolved in the chase, heading to other parts, and yes, this would all happen in a fairly regular sequence.

It turned out to be quite a productive rabbit hunting day, with all five children bagging at least one rabbit, and with a total of seven rabbits caught. There were also a few misfires, a fairly common factor when trying to hit a fast moving target in cover. Been there and done it myself, many times!

It made Broecker and I very happy to see how the five young and new rabbit hunters had a distinctly fun and satisfying day in my “rabbitat”. Something tells me it won’t be their last time. I think I’ll have to make this an annual event!