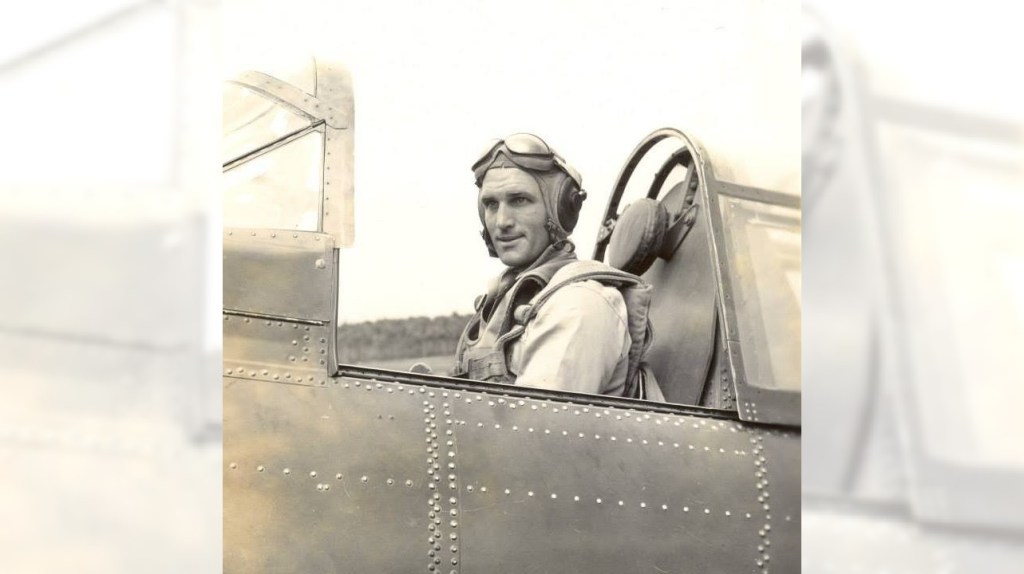 A photo shows John Hughes and four other Marines crouched on an airfield firing guns at Japanese aircraft attacking overhead. Black smoke and explosions surround them.

But it was years before the highly decorated Navy aviator, the last known Pearl Harbor veteran living in Orange County, really spoke to his family about his experiences in World War II…and yes, bravery.

Hughes died earlier this month at the age of 102, just before his 103rd birthday. He was buried on Wednesday January 19.

Hughes was a man of great humility, who loved his country and served it proudly for decades, those who knew him said. He led a healthy lifestyle, although he occasionally smoked a cigar and enjoyed a martini. At 69, he graduated from Cal State Fullerton with a degree in history. He was there with two sons, but graduated before them.

“He lived through a lot of the stories he learned there, and sometimes he had a different version,” said his son Jerry Hughes, 70.

And, he also did quite a bit of military history.

The start of World War II

On December 7, 1941, Hughes, who grew up on a modest farm in the then Rivera community and joined the Marine Corps shortly after graduating from high school in 1937, was based at Mooring Mast, Ewa , Oahu, Hawaii. He had just come out to grab the paper when he heard a low flying sound and looked up to see planes with big red balls on the side and torpedoes below. He and other Marines were informed that the Japanese might be up to something.

“He knew what it was and he got everyone he could get together and they started shooting,” Jerry Hughes said. “He said it was pretty hairy, but that was all he could do.”

A snapshot of these exploits is captured in the photo by an unknown photographer. A few minutes later, there were more Japanese planes. Hughes and other Marines tried to fend off planes parked on the airfield, so one on fire wouldn’t blow up the neighbor.

Then Hughes heard what sounded like huge thunder coming from Pearl Harbor and he thought the USS Arizona had been hit.

Within two hours, the attack on Pearl Harbor was over. The cost to Ewa: 33 planes destroyed, 14 damaged, four Marines killed.

Despite the drama and historical significance of this event that launched the United States into World War II, Jerry Hughes said his father did not say much about this incident or the many other missions he would carry out during the war, then later during the Korean War.

“Most of those who served then didn’t talk about it,” Jerry Hughes said. “He liked to fly and he talked about it, but not about the horrors of war.”

Discover the service of John Hughes

It was not until much later that Hughes’ children would learn more about their father’s career and his importance to maritime aviation.

On the 70th anniversary of Pearl Harbor in 2011, Hughes and his family traveled to Hawaii. As part of the event, Hughes was interviewed for a living history segment by Danny Martinez, a host for the National Park Service and Discovery Channel.

Jerry Hughes and his siblings listened.

“We discovered things we didn’t know,” said Jerry Hughes, “and learned more about his experiences during the war.”

They found out how the former airplane mechanic became a pilot and the effect the attack on Pearl Harbor had on that.

Hughes volunteered and was ordered to attend Pensacola Flight School. Fl. After training, he was again deployed to the South Pacific where the Marines fought the Japanese across the many island chains. Hughes’ job was to dive the enemy.

He flew at least 50 missions over Guadalcanal, a critical battle for the Americans. The fight in the Solomon Islands was the first step towards Japan’s surrender. The Marines lost 1,152 on the ground and 55 in the air.

While Hughes’ children didn’t get a better glimpse of his service until after the visit to Pearl Harbor, some local Orange County Navy veterans already knew of his heroism.

One of those men is Dwight Hansen, a retired Marine Aviation Electrician who served at Marine Base El Toro from 1987 to 1993. Although he is half Hughes’ age, he became fascinated with the tales of the former Marine.

Passionate about military and military history, Hansen attended the county’s annual Memorial Day celebrations. He was particularly fascinated by the guys in white caps who had served at Pearl Harbor. On appropriate occasions, he would ask them to pose in photos with him and his three children, he said.

“They appealed to me because my dad was in World War II and I love history, especially living history,” said Hansen, 52, of Irvine.

This chapter was disbanded in 2014 because there were so few veterans left. The last surviving member, Dick Higgins, who served in the Navy and whose barracks on Ford Island was the first to be bombed, left Orange County in 2013. He is 100 years old and now lives in the ‘Oregon.

Higgins last saw Hughes in 2016, he said, at the 75th anniversary of Pearl Harbor in Hawaii.

“It’s nice to have been with the other veterans,” Higgins said of Bend, where he lives with his granddaughter, Angela Norton. “We were a bunch of brothers.”

Norton remembers his “grandfather” visiting and being excited to see Hughes.

“They chatted all night swapping stories,” she said. “It’s a special camaraderie that can never be broken.”

The years of that camaraderie with Hughes was also something Hansen said he enjoyed.

“He was very low key and acted like it was no big deal what he was doing,” Hansen said of the man he became good friends with. They would meet for lunch, celebrate the Marine Corps birthday, and travel to Pearl Harbor birthday parties in Hawaii.

“My son calls these Marines ‘men of legends,'” Hansen said, adding that his son was a Marine combat photographer. “And that sums it all up. As Marines, we have been told the stories of those who came before us, and we are very attached to the tradition. To meet a legendary man, who was in Pearl Harbor and Guadalcanal and all over the South Pacific, is incredible.

Hansen said it was also Hughes’ example that inspired his children to serve. One is in the army, the other in the marines and his youngest has just joined the marines.

“Growing up around these World War II veterans and seeing the kind of men they were and how willing they were to die for our country and our freedoms,” he said. “My kids want to help pay back what they’ve given and follow in their footsteps.”

After serving in World War II, Hughes continued his career in the Marine Corps and was posted to Base El Toro. Shortly thereafter, he married Mary Duba of Libertyville, Illinois. But by 1952 he was back in action after working with famed aviator Igor Sikorsky to develop the Sikorsky helicopter. He flew this same helicopter in medevac and rescue missions during the Korean War.

He would later tell other Marines like Hansen and his children that these missions to save others were more important to him than any of the dive-bombing flights in World War II because it “felt good.” .

After continuing his military service at Cherry Point, North Carolina, military schools and the Pentagon, Hughes returned to El Toro to teach young airmen to fly helicopters in 1961. He retired there in 1964 .

Jerry Hughes said he and his siblings were very pleased with their father’s life well lived. He said his father didn’t consider a career as a civilian pilot because “if you don’t have ammunition, what’s the point?” Instead, he ran a small store.

“We’re incredibly proud and we know the sacrifices all of these guys have made,” said Jerry Hughes. “He was a true Marine who honored everything about the Corps. Basically, whatever they did, he was ready to do it.

Hughes lived the rest of his life in the house he and Mary bought in Santa Ana in 1961. He also died there on January 7.

He was a quiet man who never raised his voice and he taught his children the values ​​of humility, hard work and service, his son said.

For Jerry Hughes, he said he will mostly remember his father living a “no regrets” life.

“He didn’t dwell on the past, but was proud of the past,” Jerry Hughes said. “He was proud of his service and what America stands for. He didn’t brag and he knew he was doing his duty. And, he respected other Marines for doing the same, especially ground troops, they were the real heroes.

Hunt: The result is the same no matter how it is done

In theaters this week: “Promised Land” and a special on Janet Jackson