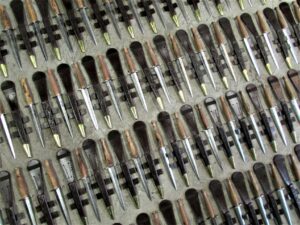 You want to know more ?

Just want to read a number? No problem, you can subscribe for just one week (or more if you wish).

A Lochaber gunsmith has created over 50 handcrafted examples of one of the world’s most iconic combat knives to mark half a century of British Army commando-trained engineers.

It took nearly a year for Paul Macdonald, originally from Glenuig, who now runs his MacDonald Armories near West Linton in the Scottish Borders, to complete the special order of 54 Fairbairn & Skypes Commando knives.

Examples of this legendary combat knife were recently presented to members of 59 Independent Commando Squadron, Royal Engineers based at RMB Chivenor in Devon, to mark the 50th anniversary of the unit’s founding in 1971.

The unit is made up of volunteers from the British Army’s Royal Engineers and is a key part of the Royal Marines’ 3rd Commando Brigade, whose main role is to provide combat engineering support to the brigade.

What made these examples of the Fairbairn & Sykes commando knife extra special was that the wooden handles – known as the hilt of a knife – were made by Paul from the wood of a beech blown by the wind that began life on Achnacarry Estate, Lochaber.

Achnacarry Estate housed the Commando Basic Training Center during WWII and has long and proudly been associated with Britain’s famous elite soldiers.

The beech from which Paul obtained his wood for the hilts of the 54 bladed weapons came from one of the saplings planted by Donald Cameron of Lochiel at the time of the arrival of Prince Charles Edward Stuart.

According to legend, upon learning of the prince’s arrival nearby, Lochiel immediately stopped his work, leaving the saplings in a trench with the intention of planting them later.

But he never returned and the trees took root and are still there to this day along the Arkaig River.

Paul explained: “It has been a year of preparation and a separate honor to manufacture a limited number of Achnacarry Heritage FS combat knives for 59 Commando Squadron Royal Engineers, commemorating their 50th anniversary.

‘The handles have been made from stabilized spalted Achnacarry beech wood. This is a tree that was planted by Clan Cameron chief Donald Cameron of Lochiel in August 1745 and grew to be part of the roping course at the Commando Basic Training Center during World War II.

‘Each knife bears a full commemorative engraving on the steel blade and the leather of the scabbard. Each guard is individually numbered with signed certificates of authenticity.

And Paul added that he was delighted with the result of the special shipment of knives.

“They took a long time to make and I was delighted with how they turned out. From what I heard, they were very well received by the military, active and veterans, who presented them,” he told us.

Paul already had in his possession the timber stock from the Achnacarry Estate beech and says the link between the timber, the Jacobites and the wartime commandos makes the knives – which follow the 3rd pattern first issued during the war – a little more special.

Paul’s Macdonald Armories handcraft the largest range of high quality Fairbairn-Sykes British Commando knives available in the world today, but they were so popular they proved Paul had to stop taking orders he several years ago when he had enough work for the next decade.

As well as being a gunsmith and sword maker par excellence, as Maestro Macdonald he is also one of Europe’s leading scholars and instructors of traditional martial arts. a master-at-arms teaching traditional Scottish martial arts, including historical styles of fencing and swordsmanship.

For years he has been making high quality reproductions of edged weapons for historical fencers, collectors, museums and theater companies.

One of the special commando knives and accompanying certificate made by Paul Macdonald to mark the 50th anniversary of the Commando Sappers. Photo: Macdonald Armoury. NO knives F09 04