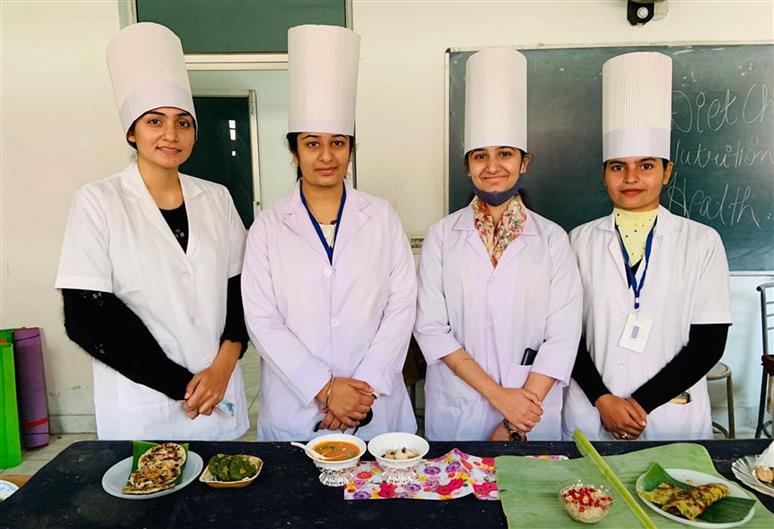 Jalandhar: Kanya Maha Vidyalaya organized a cooking contest. The contest was organized by the Department of Home Science. The students demonstrated the importance of a nutritious diet for leading a healthy life. Showcasing their cooking skills, the students prepared delicious and balanced dishes and also explained the benefits of a nutritious diet and the drawbacks of junk food. In this competition, Rajwinder Kaur placed first, Harsimran Kaur got second position and Ekta Rishi got third position.

To commemorate the 75th anniversary of India’s freedom as Azadi Ka Amrit Mahostsav, the youth club of PCM SD College for Women in collaboration with All India Radio organized a recitation and declamation contest of poetry. The contest was organized to provide an opportunity for the students to show off their presentation skills and also to instill a spirit of patriotism among them. The judges for the event were Mohammad Imtaij, Program Manager of AIR, Dr. Surinder Saini, Head of Punjabi Department, and Gurjit Kaur, English Department. In the declamation contest, Isha Chabbra from B.Com Semester III placed first and Vaishali from B.Com Semester V won the first position in poetry recitation.

Say no to Chinese twine

The DIPS school chain organized an online activity on kite making and kite flying. During the activity, the students made beautiful kites and learned the technique of flying kites. They were also told that 100% cotton yarn is the best cotton yarn to use for kiting. Parents also participated in this online activity and gave their opinion on the kite. The teachers insisted on banning the Chinese twine to avoid harm to humans, birds and other animals as well as the ecology. Students were asked to use cotton thread to fly kites. The principals highlighted the prohibition, storage, sale and use of Chinese twine and informed the students about the harm caused by the twine to birds and humans.

‘Disha- An Initiative’ conducted under the guidance of the Bowry Memorial Educational and Medical Trust, has held a second vaccination camp for Innocent Hearts students studying in IX and XI, the age group of 15 to 18 years old. This camp was run in conjunction with the Civil Hospital under the Bowry Memorial Trust Medical Services. It has been set up in accordance with the directives issued by the government. Vaccination was reserved for students whose parents had given written consent. Vaccination camps have already been organized for pupils in classes X and XII.

The Mathematics Department PG of Hans Raj Mahila Maha Vidyalaya organized an extension lecture on “Introduction to Data Science via Python” and a poster presentation competition on “Maths Shorts in Data Science” under the guidance of Professor principal Ajay Sareen who always motivates to organize such events from time to time. Dr. Sandeep Ranjan, Professor and Computer Engineer, Swami Vivekanand Institute of Technology, Banur, Rajpura, was the resource person and judge for the day. In this poster presentation competition, Arbia Tahir got the first prize, Gaganpreet Kaur and Taniya got the second prize and Jiya and Sahibpreet Kaur got the third prize.

A four-day Covid vaccination camp was organized at the DAV public police school for pupils in the 15-18 age group in grades 9th-12th. The camp was organized by Dr. Paramjeet Singh, Chief Medical Officer of PAP Hospital, with his team. Students received the first dose of vaccine under the supervision of the school’s Dr. Vinita according to the schedule and time slot provided to them, making sure to maintain social distancing and crowding. The students were accompanied by their parents and guardians.

Phagwara: Slogan writing and poster making contests were held at MLU DAV College, Phagwara to sensitize students on suffrage under the leadership of Principal Kiranjeet Randhawa, College Nodal Officer Ajay Kumar. A webinar was organized for the students and they also shared their views. Dr. Randhawa explained to the students during the webinar that voting is the fundamental basis of democracy. Every citizen’s vote is counted in the voting process. We must honor the right to vote granted to every citizen by the Constitution of India. The feeling after voting instills a sense of pride in being a responsible citizen. She further added that more awareness is needed to inform people about the representatives they elect. Dr. Randhawa enjoyed having students express their views on writing essays and slogans. /OC