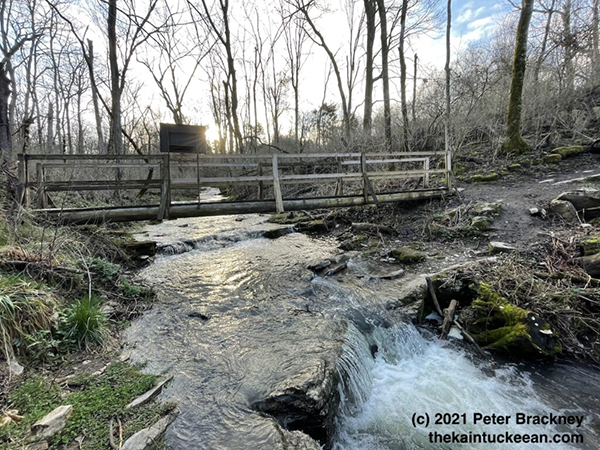 Kentucky by Heart: The Kentucky River’s story proves as colorful as that of those who live along its banks

This is the second in a two-part look at The Kentucky River, a book published in 2000 by William E. Ellis (University Press of Kentucky, 2000). I hope readers will see the river as I do, as part of the heart and soul of our state’s heritage, as well as being vitally important today.

Admittedly, the construction of a system of locks and dams on the Kentucky River was not without controversy. Ellis reported that longtime Corps of Engineers employee James C. Thomas described Kentucky as having “too many locks and you can only lock one barge at a time”.

A lock keeper explained that it sometimes took “three hours to lock a tug and two barges through the narrow and short locks”. Historically, many political battles have been fought over the effectiveness of establishing locks and dams on Kentucky. Working against the whole exploitation of the waterway, Ellis noted that the river “often seems to have a mind of its own,” which takes us into The Kentucky River’s fifth chapter, “The River Always Wins.”

A separate long book could be written on the history of floods, drownings, and droughts along the Kentucky River and its tributaries. There is, however, a little irony about the floods. Ellis mentioned that flooding is often beneficial when flooded soil leaves the tailings. A Lee Countian remarked, “I saw the settlings eighteen inches deep,” which eliminated the need to spread fertilizer on those occasions. Obviously, most haven’t and wouldn’t want to see the raging waters. Great damage has been done. Kentucky’s capital, Frankfort, has been hit hard on several occasions.

One of the most memorable floods in Frankfort occurred in 1937 when waters reached the Kentucky State Reformatory, forcing prisoners to be moved to the second floor. There was no potable water or electricity, so the two thousand nine hundred inmates were transferred to the “Institute for the Feeble-minded” nearby but on higher ground. With the tension and closeness of people together, racial issues nearly exploded until the National Guardsmen took control. Interestingly, Governor Happy Chandler used the flood-induced event to push for the completion of the new jail in LaGrange, County Oldham.

Also in 1937, Madison County was hardest hit by flooding when communities like Doylesville, College Hill, Valley View, Clay’s Ferry, and Boonesborough suffered damage and loss of life. Other counties have also been hit hard over the years. At Mundy’s Landing in Woodford County, George Chinn said of his native region: “We used to say we spent six months on the river, six months below.” In 1939, a lock keeper further south mentioned that he and his wife had to use a rowboat to get to their outhouses. The 1957 floods on the Middle Fork saw the original location of the iconic Frontier Nursing Service, Wendover, where nurse Jane Furnas woke up in the middle of the night and saw ‘only water’. ‘water”.

The Kentucky River in Frankfort (Photo by Steve Flairty)

The Corps of Engineers has been involved in both building dams and discussing their construction on Kentucky for many years. One of the projects discussed was for the dam at Jessamine Creek, a large tributary a few miles from the Dix River and High Bridge. Several influential groups expressed strong disapproval, citing “the lost beauty of the Kentucky River Palisade Gorge as well as the need to keep the river open for future transportation of coal down the river,” Ellis wrote. Others were however approved and built, such as a Buckhorn on the Middle Fork, completed in 1960 at a cost of eleven million. the Kentucky Cabinet of Finance and Administration website includes more information on the many dams/locks along Kentucky.

Ellis calls the Kentucky River a “subculture” in his chapter titled “My Mind is on the River”. This idea comes from the stories told about life in Kentucky from a completed oral history project. The interviews revealed a strong sense of belonging among the people of the river. Claude “Buck” Horn was one of eleven siblings who lived on a makeshift boat during the Depression. He did what he could to help his family survive, Ellis wrote, including “hunting and fishing, killing ducks for their meat and feathers, and renting johnboats to customers who often didn’t pay.” .

In Monterey, Owen County, one interviewee recalled diving from the dam and swimming underwater under the apron. “I dived from that dam and got under it and sat down. I did that once when my dad was fishing and I liked I scared him to death. He didn’t know where I was going .

Then there were the “buried gold” stories. One of them was informed of the existence of three barrels of gold hidden around the Brooklyn Bridge in Mercer County. In Drennon Springs, Henry County, there was said to be a cache of gold on the former site of the Western Military Institute when a cholera epidemic hit in 1854. Valley View reportedly had a stash of the glitter substance buried under his hearth, and someone’s grandfather hid $700 worth of gold somewhere in Oregon, Mercer County.

Steve Flairty is a teacher, speaker, and author of seven books: a biography of Kentucky Afield host Tim Farmer and six in the Kentucky’s Everyday Heroes series, including a children’s version. Steve’s “Kentucky’s Everyday Heroes #5” was released in 2019. Steve is a senior correspondent for Kentucky Monthly, a weekly columnist for NKyTribune, and a former member of the Kentucky Humanities Council Speakers Bureau. Contact him at [email protected] or visit his Facebook page,”Kentucky in Common: Sketch of Words in Tribute.” (Photo of Steve by Connie McDonald)

Excursion and showboats, anyone? This is also part of Kentucky River tradition. In the 1930s, a called Princess, operated by Billy Bryant, had a signature song, I’m Looking Over a Four-Leaf Clover. The craft had a stage outfitted with oil lamps and featured plays such as Uncle Tom’s Cabin, Mrs. Wiggs from the Cabbage Patch and the Heart of Kentucky. There were also trading or shopping boats, sometimes called “traveller” boats, and they were known to give out free candy to attract crowds.

Some local residents talked about fishing, hoping to catch the “100-pound catfish”, often at a trotline. When a fire hit a distillery at Camp Nelson, fish could be picked up from the surface of the water. One person said of the fish, probably joking, “I heard they came over the water smiling. They put them in enclosed basins of clear water to sober them up.

The subject of construction and work on the locks and dams of Kentucky is treated in the seventh chapter, entitled “Do not walk in the shadows”. The title refers to the dangers of lock keepers and tugboat staff being blinded by bright lights, which is a dangerous problem. Ellis also writes and includes pictures of “old” and “new” building methods. And, too, he describes the challenges of uprooting community and farming life – always a struggle – in the process of adding locks and dams, including buying property.

Struggles aside, Kentucky also invigorates the people who work it. After sitting in his car by the river and seeing a tug going to haul a load of sand to Frankfurt, Ellis wrote: “The pilot had the happiest look on his face, the smile of a man who was not only working but enjoying every minute to the fullest. Similar comments could be written on many other treatises in the book.

Ellis’ final chapter, “Whither the Kentucky,” is about the river itself, the people, and the future. Since the book was written in 2000, it might be interesting for readers to compare their thoughts to current thinking about Kentucky; Twenty-two years later, have things changed a lot? I had the opportunity to speak briefly via email with Ellis recently. He commented that way.

“Everyone should be concerned about water quality, as many people get their ‘drinking’ water from the river,” he said. “Floods are also a big concern. After reading recent articles in the (press) newspaper, I would suggest that people leave the floodplains, even though it is a beloved community. There should be more use of the river, more adjacent parks, more local efforts to clean it up every year, (and) more articles about different parts of the river.

After Industry Crises, Startups, and Pushbacks, the State’s Payday Loan Database Is Finally Up and Running