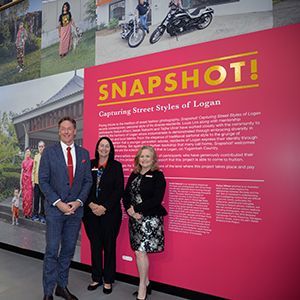 The Butterbox Theater and Logan Living Museum have been unveiled by Logan City Council and the Queensland Government as the latest attractions in the Kingston Butter Factory (KBF) Cultural Precinct.

The latest additions to the site’s $22.5 million redevelopment were opened by Logan City Mayor Darren Power and Queensland Attorney General and MP for Waterford Shannon Fentiman.

“This historic former dairy factory has been redeveloped through a project supported by Logan City Council and the governments of Queensland and Australia,” said Cr Power.

“The redevelopment has created a multi-faceted arts and entertainment space that will provide amazing new entertainment options for residents and visitors to the City of Logan.

“We now look forward to the community experiencing KBF for years to come.”

Minister Fentiman said the project was exactly what the $200 million COVID Works for Queensland program was designed to help councils achieve.

“This facility will have a hugely positive impact on the Logan community and was made possible by $6.57 million from the Queensland Government’s COVID Works for Queensland program,” Ms Fentiman said.

The facility ceased to operate as a dairy plant in 1983.

The first exhibits at the Logan Living Museum will allow visitors to see, hear and experience the stories of the people of the town of Logan and will include:

More information on what is happening on both sites can be found at loganarts.com.au