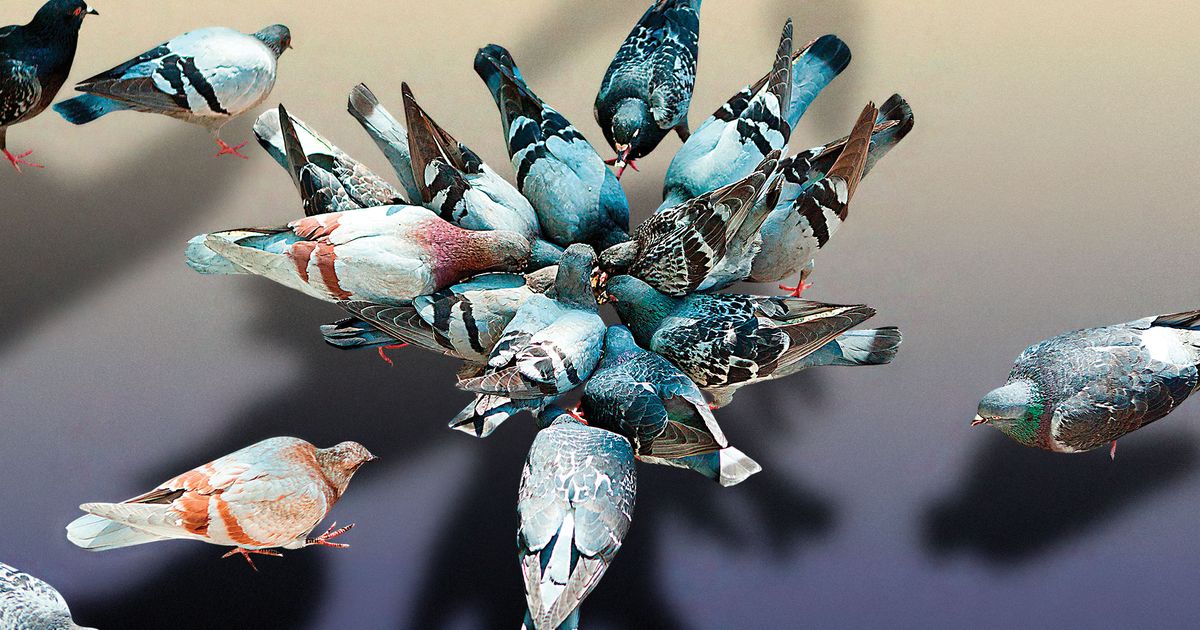 Depending on how you count, I’m in between four and 18 active group chats, in half a dozen different apps that take up most of my time on my phone. Right now I’m in one called “Ramius’s Boys” which is all about sharing quotes from the movie Red October Hunting and links related to submarines; another called “News and Politics Discussion Group”, for organizing Mario Kart matches and, above all, talking shit; and a third, “No More Furry Nudes I Promise” – although, to be fair, this one probably shouldn’t be considered “active” because no one trusted the promise its creator made in the title. A friend described to me a group chat in which she participates with one “overriding rule”: the only thing allowed is Hulk GIFs. Another friend told me that she was in a group chat about sharing photos of Cobb salads called, of course, “COBB COBB”.

In some ways, group chat feels like a throwback to the Halcyon era of AOL Instant Messenger, once the most popular method for playing with your friends on the internet. But in my life, group chats – on Apple’s iMessage, WhatsApp, Soft, Instagram, Twitter, Facebook Messenger, or a number of other apps or platforms – aren’t just additional modes of socializing, taking advantage of instant messaging or the chat room. They outright replace the mode of social organization of the last decade: the platform-centric, food-based social network. For me, at least, group chats aren’t the new AIM. They are the new ones Facebook.

Like Facebook at its best, these are pocket sources of interpersonal nourishment. Some of my group chats were created for utilitarian reasons, like planning a bachelor party, but have since gone beyond the restrictive limit of “having a special reason for being”. Most have been free and themeless since their inception, thrown haphazardly and supported by gossip and boredom and the ability to poke fun at someone else’s typos. The paradigmatic group chat message is a message my friend Sam sent recently: “Want to see something slightly funny?” In group discussions, the answer is always “yes”.

It’s easy to forget, 15 years, 2 billion users, and an ethnic cleansing controversy or two later, that Facebook was a place for this kind of aimless sociality before it was a place to block and report to. repeatedly your half-cousin. More than that, it was a piece of essential social infrastructure – a new layer of life that effectively and aggressively reorganized social existence, describing and facilitating friendships, cliques, parties, and even memories, formalized as they go. would eventually be by Facebook photo. albums uploaded on hangover sunday afternoon.

In fact, Facebook’s mandate has never been to make social life easier. It was about attracting new users and keeping them there, even in alienating and potentially antisocial ways. Over the years it has grown beyond the original limited social contexts it started in and has driven user engagement to the detriment of the well-being of its users. The arrival of parents and bosses in the same social space as college friends and the introduction of the implicitly competitive news feed, with its opaque multi-metric ranking system, made this once-friendly space feel like had turned against us. But according to the important investor metrics it was successful, and the constantly updated and always available feed was adopted as a template for all social networks. The result was, depending on who you were talking to, either every bad thing that happened in the past five years or just most of them.

However, as the flows turned hostile, the rise of the smartphone, with its full-screen keyboard and array of free messaging options, gave us a new decentralized, context-specific social network: group chat. Over the past few years, most of the people I know and I have slowly tried to get our social life out of Facebook. Now it’s the group chat that structures and enables my social life. I learn personal news about friends more often from group chats than from Facebook; I see more photos of my friends through group chats than on Instagram; I have better conversations and less self-awareness in group chats than on Twitter. I am not alone: The Avengers are in a group chat; the actresses of Big little lies are in a group chat; Beyonce is in a group with his mother and Solange. (Jay-Z apparently wasn’t invited.) Group chats have become so fundamental to everyday life, in some cases, that they’re the first place people seek help: during filming in STEM School in Highlands Ranch, Colorado, May 7, BuzzFeed News reported that students took to group discussions to share instant updates.

And Facebook knows it. “The future is private,” Facebook CEO Mark Zuckerberg told developers at the company’s annual F8 conference on April 30. “Over time, I think a private social platform will be even more important to our lives than our digital places.” He unveiled a new design for the Facebook homepage that emphasized private Facebook groups created by users, rather than the default public news feed, and announced to the crowd: “It’s ‘it’s about building the kind of future we want to live in. ” I doubt everyone is as invested in group discussions as I am. But if Facebook is successful, they will soon be – on Facebook.

To me, Facebook’s reorientation around private groups looks less like the business of “building the kind of future we want” than its attempt to repress itself into a social life that I had saved from its thread. news. Last year, tech writer Navneet Alang wondered in a column in the Globe and Mail if it was possible to “save social media from Facebook”. In other words, could we identify from the global giant Facebook, Inc., the many uses and experiences that can make Facebook, the website and the app, so enjoyable? The flowering of group discussions points us in one direction. In almost all cases, I find the group chat to be an improvement over the machine sorted feed. Freed from the pressure to stand out from thousands of other posts, group chat conversations tend to be comfortably moderate – even boring – in a way that Facebook status updates or tweets can never be. . Since most group chats exist on platforms or apps that don’t depend on ad money or user engagement to sustain themselves, they’re as addictive or exploitative as any interaction. social.

You don’t ‘check’ threads the same way you check an endless stream: the conversation happens when enough people want to have it, but there is no algorithm to find and bring up a message. invisible chat room that you could interact with. What you get instead is an old-fashioned distraction: with intention. The flow, at its worst, is a passive, loose experience. Group chat requires a certain level of active engagement. Whatever conditioning has led us to seek validation of the glass and metal rectangles in our pockets, it is obviously at play in group chat as it does on other social platforms. But it’s happening on a human scale, with distinct reactions from a handful of friends for a slightly funny joke, rather than on the alien scale of giant platforms, with likes on the rise. endlessly for a Facebook post you dive into the president.

Like any social network, group chat has its own customs and social prerogatives. Each group chat contains recognizable archetypes – the unusual person asking “wait, what?” about each conversation; the (psychologically self-refreshed and professionally successful) member who keeps the focus group muted, meaning they aren’t alerted every time someone sees a Cobb salad – and experiences regular cycles of high activity and low, depending on the schedule and time of participants’ zones. Each group chat features smaller orbiting sub-chats featuring new constellations of the original party members, created to plan surprise parties or, worse, to complain about the guy who keeps asking “what, what?” “

Which is another way of saying that group chats aren’t always beautiful, healthy expressions of friendship. The group chat distraction may seem more satisfying than the Instagram distraction, but it’s still a distraction – sometimes even in-person socializing. Orienting your social infrastructure around strongly circumscribed groups of friends can help avoid the dreaded collapse of social contexts that is happening on Facebook, but it can also reinforce the cruel dynamic within / outside of the group. (Although, in their defense, since group chats can’t be overwhelmed by angry strangers or malicious trolls, they’re still only toxic in the familiar and reassuring way groups of friends since college.) Private group chats can create an echo. rooms as distorting as the decontextualized noise of a public social flow.

None of the many companies whose products I use to tell friends are not particularly benevolent. Apple’s IMessage, my most frequent group chat app, associates my hard-to-extract phone number with its proprietary system and divides friends into two levels – blue and green. (My friend Dan became so irritated at being excluded from iMessage group chats that he rigged a home server so he could receive iMessages chats on his Android.) WhatsApp is regularly accused of being a vector of disinformation in India. , where it has been linked to popular violence, and in Brazil, where it is a source of far-right “fake news”. (Unsurprisingly, WhatsApp is also the most “smooth” of all the chat platforms, and it’s revealing that the first step in reducing the flow of misinformation on the app is to turn off the “transfer” button.) It also belongs to Facebook, the very company that I took to group chats to get away from it all.

But while most of these companies are not trustworthy, at least there are a lot. The main advantage of group chat is that the ‘social graph’ of your friend network exists in your head, and not just on a server in Iceland, which means you can easily ditch one platform for another without no problem – or, like most of us, occupy many platforms at once. The result, as Facebook knows all too well, is an Internet much closer to what we might want. “The only thing I still enjoy doing online / with technology is texting,” Sam, the friend who wanted to share something slightly fun, told me. “Everything else is torture / agony / hell. But I love iMessage.

* A version of this article appears in the May 13, 2019 issue of new York Magazine. Subscribe now!