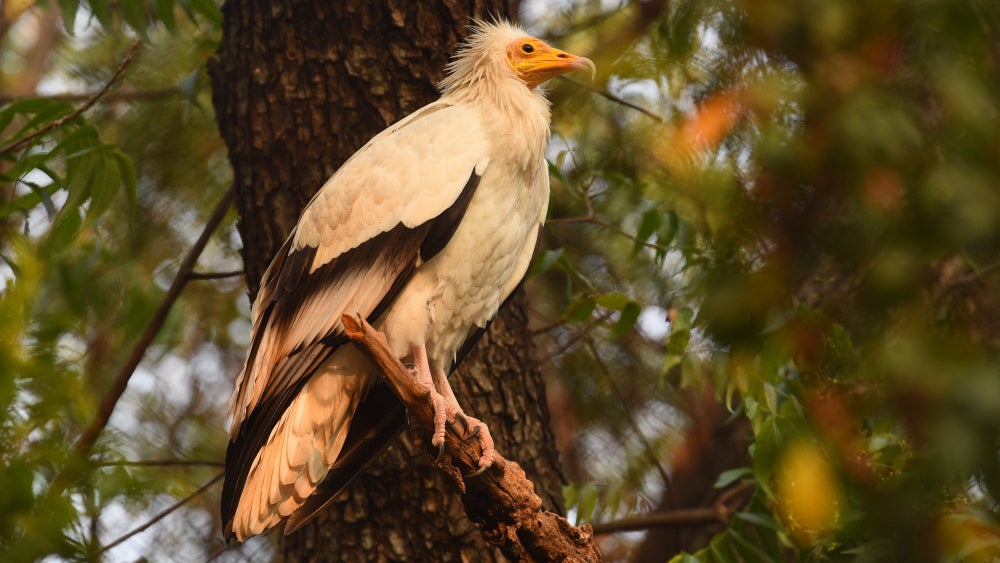 An Egyptian vulture, found in critical condition in Delhi, was rescued by Wildlife SOS Rapid Response Unit and is currently under medical observation.

On Tuesday, officials from the Kalyanpuri area police station in east Delhi spotted the injured vulture hanging from a tree with a badly injured left wing. They immediately contacted the Wildlife SOS team on their 24-hour emergency helpline.

Identified as a rare Egyptian vulture in its juvenile stages, the bird was carefully transferred to a carrier and rushed to a recovery center, where it continues to be under medical observation.

“The bird is suspected to have fallen victim to the deadly Manja, a glass-covered string used to fly kites,” Wildlife SOS said in a statement Wednesday.

Wasim Akram, deputy director of special projects for Wildlife SOS, said juvenile Egyptian vultures perform short flights, often stopping in safe areas devoid of predators. This particular vulture couldn’t take flight because it injured its wing, most likely because it got caught in the Manja. “Our team has placed the vulture under mandatory medical observation to ensure he recovers safely.”

Kartick Satyanarayan, CEO and co-founder of Wildlife SOS, said: “Manja, the glass-covered nylon rope commonly used for kite flying, can be deadly to birds as they can become entangled in it and suffer serious wounds. These cords are so sharp that they can cut through the flesh and bones of a bird. The Wildlife SOS team rescued many birds captured in Manja. Our rapid response unit and veterinary team are fully trained to ensure that such cases are treated with the utmost caution.

Earlier this month, Wildlife SOS rescued another Egyptian vulture who was found in a semi-conscious state outside a house in Sector 26, Noida.

The Egyptian vulture is an Old World vulture widely distributed in India, the Iberian Peninsula and North Africa. These majestic birds are helpful scavengers and play an essential role in the ecosystem by feeding on carrion and disposing of the carcasses of dead animals, thus preventing the spread of infectious diseases.

Despite their importance, the population of Egyptian vultures is slowly declining due to various anthropogenic pressures such as habitat loss and is listed as an endangered species on the International Union for Conservation of Nature (IUCN) Red List. ).

The above article was published from a telegraphic source with minimal changes to the title and text.

Orangutans can learn to use stone tools like hammers and knives

Considering a payday loan? These alternatives will get you through a crisis