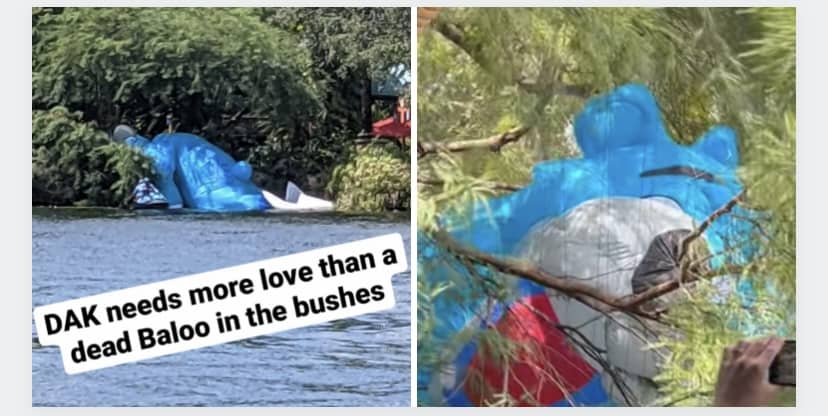 Disney KiteTails is the newest daytime show at Disney’s Animal Kingdom. Despite the creativity and uniqueness of the show itself, it’s safe to say that it has encountered its fair share of issues.

Disney KiteTails officially made its guest debut yesterday, October 1, in honor of Disney World’s 50th anniversary. However, even though it has only been displayed to guests for two days, another issue has arisen.

This afternoon, when guests were visiting Animal Kingdom, during a Disney KiteTails performance, they noticed the Baloo kite had made a forced landing and got stuck in the trees and bushes.

This was shared with TikTok via user TheTragicKingdom, which you can view by clicking here.

Instagram user MontleyKingdom also shared a photo of Baloo stuck in the bushes this afternoon to their Instagram Story, which you can see below:

Guests can also add Disney KiteTails to their plans on My Disney Experience, ensuring you don’t miss out on this once-in-a-lifetime experience.

The Walt Disney World website describes the upcoming experience as:

Hearts and imaginations will fly as incredible kites and windcatchers dance through the air to beloved Disney songs during this high-flying performance at Disney’s Animal Kingdom theme park. Marvel at the elaborate three-dimensional kites of Simba, Zazu, King Louie, Baloo and more as they soar over the Discovery River Amphitheater, starting October 1, 2021 during of the Walt Disney World Resort 50th Anniversary Celebration.

Have you ever seen Disney KiteTails? What did you think of the show? Let us know in the comments below.

If you want to visit Disney World during the 50th anniversary celebrations to see all that the parks have to offer, but aren’t sure where to start, don’t hesitate to contact our friends at Academy Travel.

Orchid hunting is gaining popularity, but flowers are feared to be ‘loved to death’