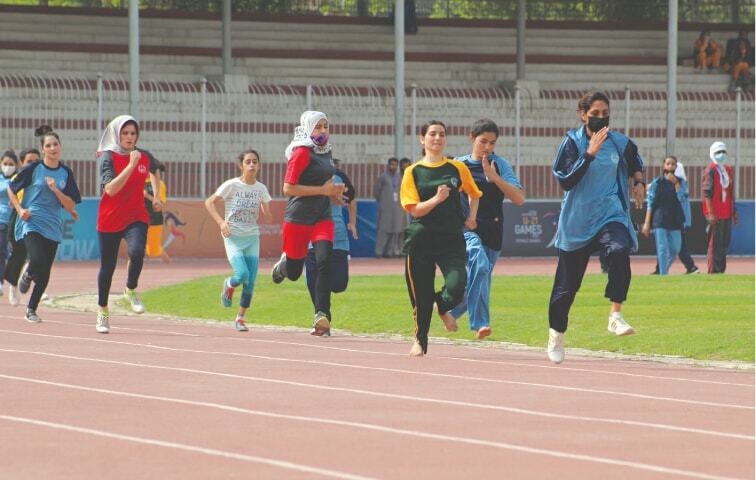 Husna Awan, 18, and Hafsa Awan, 16, are two athletically gifted sisters who practice karate, play badminton like professionals and leave behind all their peers in track and field events. Still, the talented sisters struggle to make sports their careers. Despite the odds against them, winning sporting laurels for Pakistan is a cherished dream for both of them.

The sisters come from a very poor family in Peshawar. Their father makes kites for a living. Their mother is sick. Some time ago, she also lost her sight.

As their mother’s mobility was limited, Husna and Hafsa took over all the household chores and looked after their parents. They also learned how to make kites from their father. These days, they make and sell kites to meet school and sports expenses, in addition to supplementing what little their father earns.

The sisters’ sporting journey began a few years ago when they begged their father to let them join the martial arts academy near their small home in Sohail Abad, on the outskirts of Peshawar. The father agreed because the girls were doing well academically. This is how the girls were able to receive karate training under the guidance of a qualified instructor.

Two sisters, who make kites for a living in Peshawar, are also beautiful sportswomen who dream of making their country known.

It was also during this time that, to ease their father’s financial burden, Husna and Hafsa learned the wonderful art of kite making from their father at home. “And then we would collectively make 300 kites a day, which we would take to Yakatoot Bazaar, a big kite market, to sell,” says Husna, the eldest of the sisters.

“It has helped us to some extent, but we still need financial help to support our parents, as our mother is now bedridden and our father is [practically] jobless,” says Husna. “He has no other income than what he earns selling kites. It’s not enough because he also has to pay for our mother’s medical bills.

The sisters are often seen competing in provincial under-21 games for different sports such as badminton, volleyball, track and field events and, of course, martial arts. They won several gold, silver and bronze medals as well as certificates of honor in martial arts.

“Despite everything, our parents always encouraged us to make an effort,” says Hafsa, the younger sister. She adds that both of them are also attending university and after their classes they hurriedly head to the Peshawar Sports Complex to practice various sports. Their days are full. From the Peshawar Sports Complex, they head to the Martial Arts Academy. Then they finally go home for an early meal after which they settle down to make kites.

“Life is hard but we have to excel in this journey. Otherwise success will only be a mirage. We are determined to succeed in our mission to make a name for ourselves in the sport,” says Hafsa. “It has always been our dearest dream to participate in international sporting events and bring medals to Pakistan. We also want to set an example for other girls like us: hard work pays off. If we could excel in both academics and sports, they can too,” she adds.

Husna and Hafsa’s father, Mohsin Ali Awan, says he wants his daughters to focus on their education and sports, but not struggle to earn a living at such a young age. “If given a stipend by the Khyber Pakhtunkhwa government, my daughters can achieve the heights of success on both fronts,” he says.

Khyber Pakhtunkhwa Women’s Games Director Rasheeda Ghaznavi said she will soon award cash prizes to winning players at divisional level. “It would motivate and inspire more girls in the province to participate in sports,” she said, adding that they also introduced a sports scholarship for talented sportswomen in 2015, which can help girls like Husna and Hafsa.

The promise of adequate training, sports facilities, sports kits, monthly stipends and significant prizes in a context of security played its part in motivating many young girls from across the province to participate in the event. , in an otherwise conservative Khyber Pakhtunkhwa. Hafsa and Husna were also among them. However, their father as well as the parents of the other girls who won the Games complained that the cash prizes were still expected and there was no longer any mention of scholarships or stipends.

The young female athletes of Khyber Pakhtunkhwa have demonstrated their dynamism time and time again in sporting events. With a little government support, athletes like Hafsa and Husna can certainly make the country proud.

The writer is a freelancer who writes about literature, culture, and sports.

The best way to sharpen your knives

Every type of Palico in Monster Hunter Rise