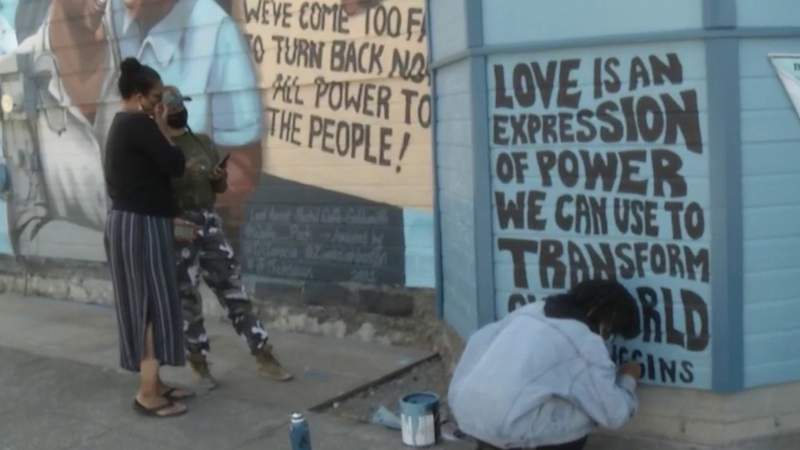 A mural pays tribute to the Black Panther movement

San Francisco, Calif. (Ivanhoe Newswire) – From New York to Los Angeles, protest art has been at the center of protests since protests last summer.

They served as memorials and tributes. However, two women want to move past the pain and start a dialogue of empowerment and success. They do this by recognizing a misunderstood and controversial era in black history through art.

It’s been a long time coming, but muralist Rachel Wolfe-Goldsmith is putting the finishing touches on a piece of history.

Formed in the late 1960s in Oakland, California, the Black Panther Party rallied for equality and helped communities.

After last summer, Vest knew it was time to pay homage to the party.

Vest detailed: “I started to think about invisibility of black women with Brianna Taylor and Sandra Bland and wanted to find something I could do.”

Enter muralist Wolfe-Goldsmith and his team who turned the house side of Vest into a tribute to the women who made up 70% of the party.

“It shows that we are here, that all the work that our ancestors and those who came before us did count and that it has happened,” said Wolfe-Goldsmith.

Team member and muralist Zoe Boston told Ivanhoe, “I believe that art has the power to change people’s perspectives.

Wolfe-Goldsmith contributed to this idea by saying, “I asked three people to walk up to this mural and walk away, shouting ‘I’m black and I’m proud.’ “

The mural took three months to paint. Over 270 names of ancient black panthers frame the images.

Satisfied with the mural, Vest said: “It is this honor that is really important.”

Boston further stated, “When I look at this mural, I see the power, I see the community.”

One of the advisers for the mural project was Ericka Huggins, a party member for 14 years. It was important for them to have the blessing of the women who are part of the Black Panther movement. The mural will now be a permanent addition to the Oakland home.

Copyright 2021 by KSAT – All rights reserved.

Katz to Carter: A Transition of Note and Solemnity