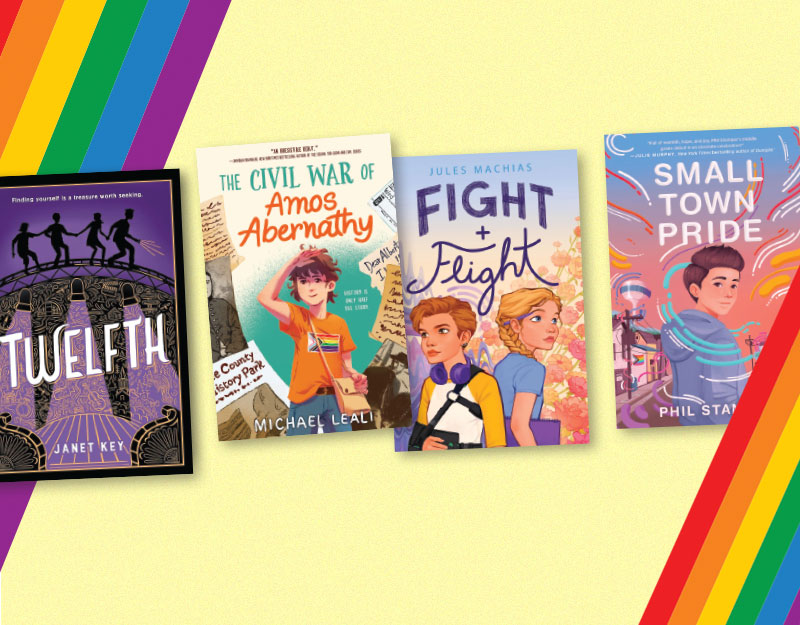 These four mid-level contemporary and historical fiction titles center on LGBTQIA+ characters who fight to live authentically through time and are a reminder that mantras like “protecting trans children” require both words and actions.

June is Pride Month and a time to celebrate, but we must not forget that the rights and safety of the LGBTQIA+ community are under constant attack by discriminatory laws and institutions. These four contemporary and historical fiction titles center on LGBTQIA+ characters who fight to live authentically through time and are important reminders that mantras like “protect trans children”
require both words and deeds.

Key, Janet. Twelfth. 368p. Small, Brown. May 2022. Tr $16.99. ISBN 9780316669313.
4th to 8th grade– It’s June 2015 and 12-year-old Maren isn’t very excited about attending Charlotte Goodman Theater Camp this summer. However, Maren is soon drawn into a mystery involving a series of clues that could lead to the missing diamond ring of Charlotte “Charlie” Goodman, the famed director who allegedly perished in a fire and whose camp is named after. Maren quickly befriends budding filmmaker Theo, and together they begin to unravel the mystery, hoping to find the ring to save the camp, which is in need of funding. The novel deftly tackles serious topics like depression, homophobia, and transphobia. It’s also wonderfully inclusive, as Theo is non-binary and Charlie is gender-nonconforming. Key makes good use of Shakespeare’s twelfth night as the backdrop for his narrative, serving as the camp’s main theatrical production, the basis for clues to the mystery, and the lost film that Charlie was working on before his disappearance. The story includes flashbacks to Charlie in the 1940s and 1950s, interspersed with chapters from Maren, set in June 2015, just weeks before same-sex marriage was legalized. Endnotes feature facts about theater, film, and LGBTQIA+ history as well as information about ways readers can seek help if they’re struggling with depression. VERDICT A gripping mystery with a diverse cast of characters; an insightful exploration of the topics of gender, depression and sexuality; and a satisfactory and complete conclusion. Highly recommended.-Laura J. Giunta

Leali, Michel. Amos Abernathy’s Civil War. 304p. Harper Collins. May 2022. Tr $16.99. ISBN 9780063119864.
5th year superior-A well-written coming-of-age novel that wraps many valuable topics – discrimination, teenage relationships, friendship, the LGBTQIA+ community, and underrepresented history into one wonderful story. Amos, who is white, volunteers as a re-enactor at Living History Park with her best friend, Chloe, who is black. There they meet Ben, who quickly becomes a friend of the duo and a budding romantic interest in Amos. But their relationship faces some challenges, including Ben’s religious family. Amos tells his story from his own perspective interspersed with letters to Albert DJ Cashier, a Civil War soldier who in modern times might have identified as a trans man. Amos discovers Albert while researching LBGTQIA+ Americans throughout history, seeking to portray people like him from the past, and hoping to win the Living History Park exhibit contest. Readers will feel the tension as Amos and his friends struggle against discrimination to complete the project. Leali’s character development is superb. The story begins in the present day, but readers learn of the events of the past year in Amos’s commentary as well as his notes to Albert, which then converge back into the present. While this technique is insightful, the time shifts may prove slightly confusing to some readers. VERDICT All in all, an entertaining and engaging read with varied characters and topics. A necessary addition to any collection looking for heartwarming tales of early crushes and the importance of centering marginalized history.–April crowd

Machias, Jules. Fight + Flight. 400p. HarperCollins/Quill Tree. May 2022. Tr $16.99. ISBN 9780063053946.
5th year superior– Everyone has something to do, and some more than others. Athletic Avery suffers from hypermobile Ehlers-Danlos Syndrome, a painful chronic condition that affects his joints. Sarah suffers from anxiety and experiences panic attacks which she tries to deal with by creating art. They both feel like they’re losing control, Avery of her body and Sarah of her mind. The alternate perspectives of these two well-developed characters allow readers to get a realistic glimpse into the minds of teenagers. Avery is pansexual, has two mothers (including a trans mother), undergoing physical therapy for a shoulder injury that prevents her from riding the bike she loves, and has a bullied, biracial best friend with ADHD named Mason . Sarah is struggling in her basics, has heavy family obligations (having to care for her younger siblings), has an aunt who recently passed away, forcing her cousin/best friend to move out, and has a brother gay in a catholic family. Avery and Sarah are brought together by an active-shooter exercise that the school administration stages as if it were real. As a beautiful friendship builds, deeper feelings develop and Sarah begins to question her religious upbringing. It’s a unique, fast-paced novel with a lot to enjoy. However, this should come with some trigger warnings: chronic and mental illness, school shootings, homophobia, transphobia, racism, bullying, death and loss, to name a few. VERDICT A solid, character-driven choice for libraries that tackles tough topics with skill and nuance.–Claire Covington

Buffer, Phil. Small town pride. 272p. Harper Collins. May 2022. Tr $16.99. ISBN 9780063118782.
5th year superior– In the small town of Barton Springs, OH, Jake is the only openly gay kid, a fact he’s pretty comfortable with – though he’s not sure he likes the huge pride flag that his father hooked. Especially because the mayor across the way doesn’t like lawn signs, protests, and anything that threatens the perfect peace she aspires to build in town. As people begin to take sides, Jake wonders what “pride” really means and if he can fit in in the small town he loves. When the mayor’s cute son agrees to help organize the town’s first pride festival, Jake wonders if he can really be trusted and if pride in this town is possible. This is a timely and relevant novel with references to current events that mid-level readers will connect with. Jake and his friends navigate all the normal triumphs and pitfalls of middle school, while planning a Pride Festival with all the optimism and nerves expected of a group of teenagers. Stamper excels at exemplifying the range of support Jake might expect to find, with some of the hypocritical adults undergoing well-designed character development. Some interactions read like a guide to having tough conversations, but for a book that’s about empowering tweens, that’s not necessarily a bad thing. VERDICT Middle schoolers will be drawn to this story of a child trying to find his place, learning to speak, and understanding what pride really means.–Kristin Brynsvold